Things you need to know on how you can take care of your pet. 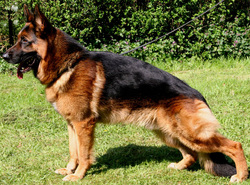 Health
German Shepherd Dog at an agility competition. Many common ailments of the German Shepherds are a result of the
inbreeding practiced early in the breed's life.[31] One such common ailment is hip and elbow dysplasia which may lead to the dog experiencing pain in later life, and may cause arthritis.[32] A study by the University of Zurich in police working dogs found that 45% were affected by degenerative spinal stenosis, although the sample studied was small.[33] The Orthopedic Foundation for Animals found that 19.1% of German Shepherd are affected by hip dysplasia.[34] Due to the large and open nature of their ears, Shepherds are prone to ear infections.[35]German Shepherds, like all large bodied dogs, are prone to bloat.

In Europe, the average lifespan of a German Shepherd is 9.7 years,[2] which is normal for a dog of their size.[36]
Degenerative myelopathy, a neurological disease, occurs with enough regularity specifically in the breed to suggest that the breed is predisposed to it.[37] Additionally, German Shepherd Dogs have a higher than normal incidence of Von Willebrand Disease, a common inherited
bleeding disorder.[38]

Feeding - http://www.thegermanshepherd.org/the-german-shepherd-diet/feeding-tips.html
German Shepherd puppies should be fed three to four times a day, while you should feed adult German Shepherd dogs twice daily: one morning and one evening meal. Don't force your dog to perform too much activity before or after a meal – strenuous exercise in the hours surrounding a meal can lead to bloat (much like the old maxim about not swimming in the pool for hours after lunch – which is, by the way, untrue.) There is some food, however, that is inadvisable to serve to a
German Shepherd dog. This includes grains, and many dog food providers suggest that you avoid grains entirely in your dogs diet – although of course an
occasional table scrape won't hurt. But remember that your German Shepherd dog is primarily a carnivore, and do not adjust his diet without reflecting this one
essential fact. Lastly, it's also a good idea not to leave large amounts of food in bowls or in any feeding areas. The thought that your German Shepherd will
simply eat and nibble away as needed throughout the day is unfortunately not true. Most dogs, Shepherds included, will literally eat everything in their site.